Was it really over a year ago that I last posted a blog? I suppose that’s a hypothetical question because I know it was! It just doesn’t seem that long ago I was writing about my (then) new album, ‘Reversing Sideways In An Upward Direction’. But I was, & since then, I’ve released another solo album, ‘LEISURE LAND’ – please note the capital letters. I have now started recording my fifth, yes fifth(!), solo album, entitled ‘No Gigs ‘Til Filey’. When will it all stop?…& is that another hypothetical question? Who knows, but I just keep going…If only this blog would ‘keep going’!

Now then, to use a local phrase, the last album came out on my birthday last year (Oct. 13th 2017), & I intend to have the same launch date for the next one. Well, it’s easy to remember then, especially when I get asked, & it’s a date to work towards. Does that make me self-motivational? ‘LEISURE LAND’ took me off in a slightly different direction with my music. I’ve been told that it’s a bit darker, & not like my usual ‘Bonzo Dog Do-Dah Band-type music’. Trying not to think about it, it could be a good thing, or not. It’s selling okay, & all the comments have been positive, so that’s all to the good. It’s time to move on, though, & build on that album’s ‘directional newness’. 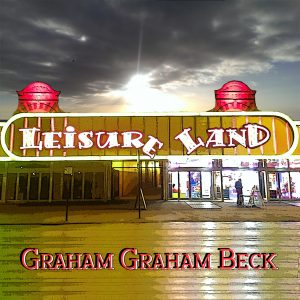 It followed the theme, although I didn’t realise whilst putting it together, of our leisure time & how we spend it (from wasting it away in amusement arcades, to relaxing & dreaming on the banks of The Humber – with a song dedicated to the new, plastic-like £5 & £10 notes, ‘Slippery Money’). The whole album just fell into place, with a few instrumentals added, to give it a bit of variety…& I do love instrumentals! Without words, you’re suddenly free of ‘structure’, & anything can go! I like that.

‘No Gigs ‘Til Filey’ has yet to form properly. There are no plans, no direction, & no boundaries, I suppose. The first batch of songs are coming along, with titles such as, ‘The Bingo Caller Of Doom’ (obviously another amusment arcade-related subject, written after the previous album was recorded), ‘Opulent Corner Bath’, ‘There’s A Monkey In The Clog Tree’ & ‘A Love Song To A Urinal’. There’s everything from ethereal moodiness to big band dance music. Maybe the direction is that there isn’t a direction?! Plumbing certainly comes into it, but only on two songs…Or at least, that’s what I thought, as weirdly enough, there is going to be another ‘instrumental (or two) with some words that are sung in a melodic fashion’, & one of them is ‘The Missing Sink’! It seems that during the course of writing this blog, the project is starting to become clearer. But, let’s not get carried away with ourselves – or more accurately, ‘myself’ – as it could be a red herring/dead end. No matter, things are going well enough, so I shall just keep on keeping on!!…

There has been a lot of things happening behind the scenes (literally) recently. Hull’s ‘City Of Culture 2017’ year passed off really well, exhausting just about everyone involved in it – & even those not. Gigs are in the pipeline, & there are a few before Filey (Folk Festival). It’s time to start rehearsing the new songs, as well as recording them. I best stop writing this blog, then!