Having recently finished recording/producing/mixing, & then physically getting my new (very first) solo album, ‘A Bathful Of Nasturtiums’, ‘out there’ to the general public, it was with a sense of satisfaction that I actually made my deadline date. I felt good. Everything was in place for the launch at Filey Folk Festival (see previous blog). The problem was, due to my lack of folky-ness, it didn’t sell any albums. So, all I had to do now was PROMOTE IT!! But how? I decided to start with local radio, & booked a spot on BBC Radio Humberside (the David Burns Show), followed by Vixen Radio (a community radio station, with ‘The Foxes Den’ show). I played several open mic nights, that alerted people to the songs & the album – & the fact that several local musicians had helped out too. A few copies were going here & there, which was great…..& word of mouth also spread the news. But what next??

Initially, I sent out a few promotional copies, including a couple to reviewers, but apart from the two radio stations & a reply from one reviewer, I’d heard nothing. Then suddenly, there in my Inbox, was a copy of a forthcoming review, written by Alan Clayson! As this was my very first solo attempt, it was all a bit daunting. Would he be kind, brutal, honest, not honest but polite, or any combination of these things? When I started to read it, I couldn’t believe my eyes! It was good. It was VERY GOOD! It was an uplifting experience, that made the making of the album really worthwhile. I was sent into a strange sort of euphoric state. Yes!!! So, I suppose I ought to let you read the glowing review. Here it is…… 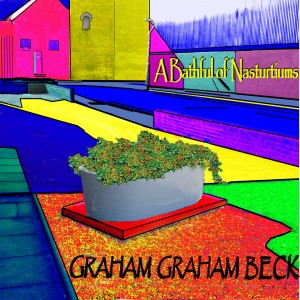 ‘A Song For Those Not Listening’, the third track in, ought to be compulsory listening for the critic who either skip-listens or doesn’t bother at all with most of the musical flotsam-and-jetsam that washes up round his word processor every week – because if A Bathful Of Nasturtiums is treated so, he’ll be overlooking perhaps 2013’s most entertaining album thus far.

Its maker, Graham Graham [sic] Beck was at art college in Hull at the same time a Wreckless Eric with whom he formed Ruby and the Takeaways. When the group sundered, Eric achieved qualified pop fame while Graham Graham continued to waver and spring between music and art – which may be why part of the appeal of A Bathful Of Nasturtiums is the tactile sensation of looking at and handling a package that actually contains a cut-out-and-keep Batman mask (germane to the CD’s ‘I Am The Batman’ finale’) and a sachet of grass seeds (‘All Praise To The Manicured Lawn’).

Of the twelve listed tracks, my fave rave at present is ‘Fig Roll Overkill’ in which a sense of longing as much as the wretchedness of addiction to this biscuit pervades. Conversely, following ‘I Am The Batman’, there’s five untitled instrumental minutes of uneasy listening that I found more obscurely captivating. These, however, are but two of many startling and witty expressions of commendable sentiment framed in diverting, highly detailed and often quirky arrangements.  Moreover, if no Scott Walker, Beck’s understated approach to, say, ‘The Fag End From Hell’ or nostalgic ‘Unreliable Memories’ is as loaded as the most Joe Cocker-esque vocal explosion.  He’s no slouch as a keyboard player either. Finally, as Janice Nicholls – the girl who used to pass judgement on the latest releases in the ‘Spin A Disc’ section of Thank Your Lucky Stars – often said, it’s got a good beat and you can dance to it.

Now, you can possibly imagine how I felt, having read it & then re-read it, & then re-reread it in case I had misread it (was it all some weird, illusionary, mystical experience?) . But no, there it was in black & white in my inbox. It’s given me, & my confidence, a boost. I feel as though, at last, I’m doing something right! Now all I’ve got to do is convince other people……