strangeness in the ordinary

'MAN OF HEADS' (as described by the great ARTHUR BROWN - The Crazy World Of...), & 'that bloke from the telly'...You know, the strange one that sang, ACTION MAN WITH A GIRAFFE'S HEAD, on ITV2's BRITAIN'S GOT MORE TALENT!

My stage act blurs the boundaries between music, visual performance & comedy. The songs bring out the 'strangeness' in 'the ordinary'. Just one man, one voice (you'll be lucky if you get any more than that) & his home keyboard...& some (cardboard) stage props. I write BIG songs about the small, but important, things in life, such as biscuits, packaging, The Batman, Godzilla, bathroom suites & monkeys etc. Where would we be without them? No subject is too small to be BIG. I think I'll adopt that as my next catch-phrase!

The hummable/sing-a-long tunes are catchy, dancey, & range from Electro-Pop, Rock & Dance (Disco/Techno), through to Latin American & even Big Band - & all from just ONE bloke! Predictably unpredictable, family-friendly & entertaining (so I've been told). I have been described as Music Hall, Surreal, funny, different, unique, 'subverting the ordinary' & 'a mature punk'. I'm probably all of those, but with a dash of Bonzo Dog Do-Dah Band meets John Shuttleworth, via Dave Brubeck, Frank Sidebottom, Eno, Max Wall, Fad Gadget, Jake Thackray & Arthur Brown. I'm sure there are more...

I've had various songs broadcast on TOM ROBINSON'S 'AFTER HOUR', & they've been featured on the BBC6MUSIC MIXTAPE. They're also on BBC6Music & BBC Introducing playlists

There's a (very) short documentary about me, that appeared on BBC NEWS Online (& BBC's LOOK NORTH) recently. Here's the link: https://www.bbc.co.uk/news/av/uk-england-humber-50323032/cardboard-box-heads-transformed-my-confidence?SThisFB&fbclid=IwAR02jhpi2aCbTJAffKl16gbmXbOb4-05JR9JonQT6UHSKFDFFgE9xenbtHs I've also played a live session, & was interviewed, on Alan Raw's 'BBC Introducing' (Radio Humberside), & performed at the HULL COMEDY FESTIVAL (Nov. 2019) - which went down well, & I didn't have to change my normal set at all! What does that tell you? I believe there will be more comedy gigs coming up in future.

My last album, 'NO GIGS 'TIL FILEY' (Nov. 2018) IS AVAILABLE! You can buy it, & other albums, via the 'Buy' tab, or digital versions are available (at ridiculously low prices) on my Bandcamp page - the links are above. There is also an 'ambient side project' entitled, 'SOUNDS FROM THE TENFOOT' (May 2018) which can be purchased as a digital download (& even more ridiculously cheap!) from Bandcamp. There's other merchandise available at gigs, including badges & keyrings, plus other items on their way ...Ooohh, there's so many goodies!! 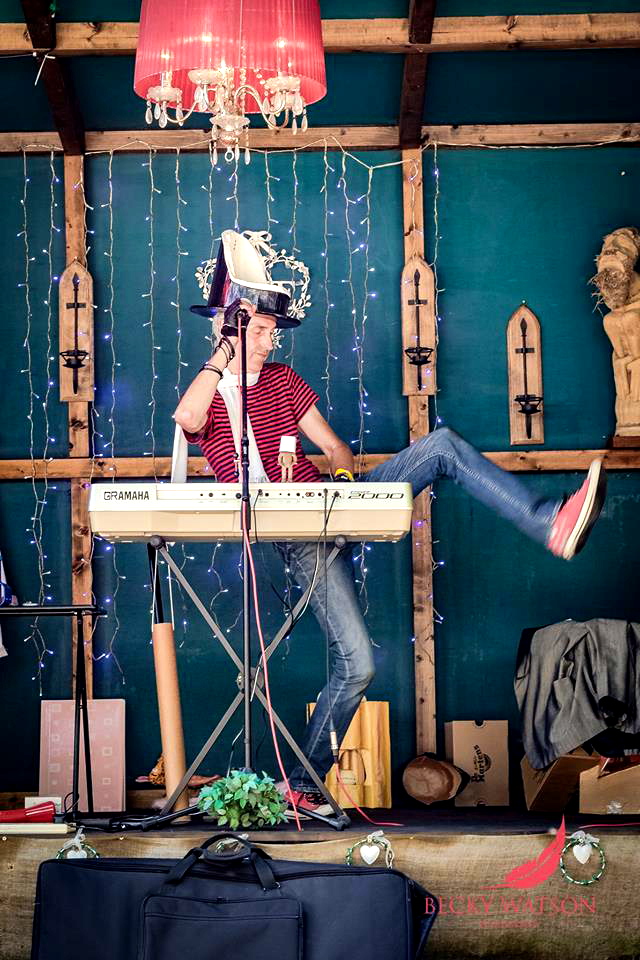 - TOM ROBINSON (BBC6MUSIC) - "THE MISSING SINK, I think is a work of absolute genius!"...TOM ROBINSON (again) - "That was a slice of sonic insanity from Graham Graham Beck. So odd, they named him twice."

- DAVID WALLIAMS (Judge on BRITAIN'S GOT TALENT) - "Even by my standards of weirdness, I found that very weird!"...DAVID WALLLIAMS (yet again) - "You could make a whole series out of this song (Action Man With A Giraffe's Head)"

- STEPHEN MULHERN (host of BRITAIN'S GOT MORE TALENT, game show host & comedian) - "I like this man!"

Latest album, NO GIGS 'TIL FILEY is available to buy from the online store, & MP3s from my Bandcamp page. 14 tracks of wonderfulness!

PLEASE NOTE: I am my own tribute band.